The Autumn term competition for the tidiest classroom was won by The Ocean Class.

The children held a vote to decide what they would like to add to their wet playtime equipment as a reward and the majority chose a new Table Top Football set.

The prize was presented to Ocean Class in the first Celebration Assembly of the year and the race began again to win the Spring reward! 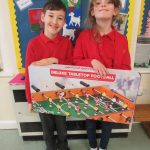