Recently, the majority of the school community signed a petition on climate change. The petition was presented in parliament on Tuesday 18th June 2019. Today we received a reply from Robert Courts MP (Witney) thanking the school for its support. The school also had a mention in the House of Commons Official Report. 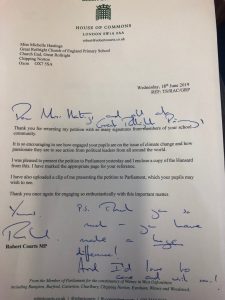